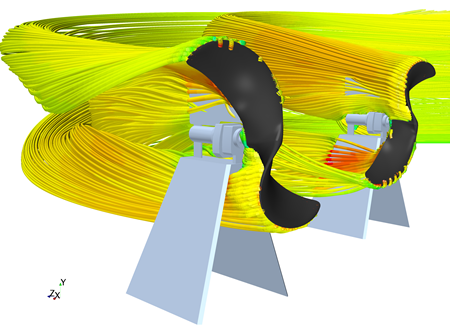 INVENT CYBERFLOW® impeller is the first horizontal mixing device for racetrack tanks that has been consistently designed and optimized based on studies of fluid mechanics. This has led to a revolutionary overall design as described in detail below. The basic design of the INVENT CYBERFLOW® flow mixer is shown in the following illustration.

The concept of integral fluid mechanics is characterized by the following special features:
Flow direction
For conventional flow generators, the direction of the reverse flow is usually on the motor side. The result often creates a turbulent flow into the propeller, leading to the efficiency of all heavily damaged equipment.
INVENT CYBERFLOW® high-performance propellers often receive static backflow, thus achieving much higher flow rates with lower energy input levels than other conventional flow generators because of their efficiency. lost due to the influence of turbulence is removed completely.
Downward flow does not create swirling
Rotary rotors not only generate axial velocity, but also radial velocity and tangential velocity. However, only axial velocity contributes to fluid acceleration in the horizontal direction. Other components that create ineffective vortices cause energy dissipation, leading to serious loss of efficiency.
The mechanical design of the integral liquid of the impeller line INVENT CYBERFLOW® uses a "anti-swirl" frame design that streamlines the flow and eliminates the vortex generated by the movement of the paddle . This effect is supported by the "anti-vortex" fins on the rear of the engine, which helps restore energy by converting radial velocity components and tangential velocity into axial flow.
With this amazing design, for the first time, the flow generator can recover energy that is often lost due to energy dissipation. This design helps to make a significant difference and greatly contributes to the performance of the device.
INVENT Power Trim Technology®
In conventional horizontal flow-generating propellers, the drive shaft of the propeller is usually placed horizontally, parallel to the reservoir floor. and the drive shaft of the propeller is aligned with the floor. As a result, the paddle blades often pump horizontally.
In contrast, it is often more effective to tilt the drive shaft slightly so that the flow is adjusted slightly upward. This can significantly reduce friction - and thus prevent energy losses at the bottom of the tank.
This method of adjusting the flow is selected depending on the application, called "INVENT Power Trim Technology®" and the optimization of this design alone can improve performance up to 10%.

Main frame optimizes fluid mechanics
The line resistors of other installation parts of the flow generator can be calculated simply by the following formula:
Fw = cw ρ / 2 A u²
In this formula, Fw is the pulling force, cw is the drag coefficient depending on the shape, ρ density (in this case water), A is the surface in contact with the flow and u is the flow rate. < br />
To reduce the flow resistance Fw, the surface A exposed to the flow must be kept as small as possible and the drag coefficient of cw of the remaining surface must be small, ie it is necessary to avoid the flat surface in contact with the current. vertical flow. The remaining surfaces should also be concentrated at the lowest u flow rate.